The DC electricity provides two primary functions. The first is heating the soil up to 100°C helping to disperse residual dense non-aqueous phase liquid (DNAPL) pools or ganglia and create vapor phase transport.  Maintaining a lower temperature (~40°C) can assist in biodegradation, if desired. The second function is to induce electroosmosis. Electroosmosis is the directional movement of pore water in soil, from anode to cathode, providing a flushing action, even in the tightest clays. This electroosmotic flow is the proven advantage of using DC electricity over AC (including 6-phase resistive heating) or steam by allowing the addition of in-situ reactive treatment zones (or curtains). These zones are emplaced perpendicular to the electroosmotic flow to intercept and degrade contaminants.  In-situ destruction means no extraction or above ground treatment is necessary, which keeps operations and maintenance to a minimum.  The treatment zones for chlorinated solvents typically are spaced 5 feet apart and consist of zero-valent iron suspended in kaolin clay. The treatment zones for biodegradation based systems can be a source of electron donors or acceptors such as organic carbon, sulfate, ferrous or lactate.

Terran, and its contractor, have developed and refined the process of in-situ treatment materials emplacement, driving down installation costs.  Using modified sheet-pile driving equipment and common mixing and pumping equipment, a large amount of materials can be emplaced in a short period of time in a very cost-effective manner. The sheet-pile driving equipment has been modified to push a large hollow mandrel up to 50 feet into the ground using a vibratory hammer.  A disposable shoe is placed on the leading edge to open the hole to keep soil from filling the mandrel on the down-stroke. Treatment materials can be pumped into the mandrel on the down-stroke or added to the mandrel once it is driven to depth. For example, a 20 inch by 2 inch opening mandrel can be driven 25 feet, filled with a zero-valent iron (ZVI) slurry on the down-stroke, and removed in about a 2 minute cycle time. Up to 500 feet per day of 2-inch thick wall can be emplaced per day (see the installation videos below).

LasagnaTM is the patented and trademarked name for this integration of DC electricity and in-situ treatment and was developed by a consortium of scientists from DuPont, General Electric and Monsanto along with the USEPA and US DOE.

A typical Lasagna installation consists of a series of planar electrodes emplaced at the outer edge of a source zone with a spread of between 20 and 100 ft, and with treatment zones consisting of iron filings suspended in clay slurry emplaced between and parallel to the electrode zones. When the power is on, the whole soil mass is heated and pore water and contaminants travel from the anode to the cathode uniformly and predictably.  The pore water that collects at the cathode is recycled to the anode by gravity.

Although there are many possible configurations and electrode arrangements, a two segment approach is typically taken.  The two segments approach consists of two outer anodes and one central common cathode.  This design results in minimal stray voltage and current.  In urban settings, it is important to minimize or eliminate corrosion impacts on local utilities by stray current.   Stray voltage and current testing at the latest urban sites indicates Lasagna can be operated without negative impacts to buried gas and water lines nearby.

How Does It Work?

Electroosmosis has been known since the 1930s as an efficient means of dewatering clays and silts for soil stability. It can also be used to move pore water and contaminants through all types of soils. This attribute, plus the resistive soil heating that occurs makes it a useful tool for the remediation of  solvent contaminated soils.

When a DC electric field is applied to soil, cations begin to move toward the cathode and anions move toward the anode. Since soil typically has a negative surface charge there are more cations than anions in the pore water (conservation of charge). These extra cations, lined up along the pore walls and moving toward the cathode, drag the pore water along causing a net pore water flow to the cathode that is uniform and predictable. In low permeable soils (clays and silts), this process is much more efficient and thorough than conventional hydraulic based processes. The directional movement through the soil allows for the effective use of in-situ capture and/or reduction zones.  The application of DC The application of DC energy also results in the heating of the soil, which is a bonus when dealing with VOC contamination. The soil heating can be harnessed to assist in the efficient mobilization of DNAPL pools and residuals much like a thermal technology. The combination of heat and pore water movement (flushing) gives electrokinetics (EK) a powerful one-two punch dealing with VOC contamination in low permeable soils.

The first large scale Lasagna™ system installation was extremely successful in reducing TCE contamination at a DOE facility in Paducah, KY from DNAPL levels to well below the Record of Decision (ROD) mandated level with no increase in cis-DCE or vinyl chloride. Pictures of the Paducah installation are below.

The Paducah site was contaminated with TCE to a depth of 40 feet with a zone of higher permeability at about 20 feet. The higher permeability zone consisted of saturated fine sand, gravel and some silt and contained the highest levels of TCE (1500 mg/kg). The lower unit was sandy clay that was not saturated. The near surface was a glacial till with a heavily compacted gravel road-bed. The Lasagna™ system was installed over a period of 6 months and operated for 2 years. At Paducah, the process reduced the soil concentrations from an average of 84 mg/kg (with a high of 1,500) to an average of 0.38 mg/kg (with a high of 4.5). The project was highlighted in a "Technology News and Trends" newsletter (EPA, TIO). The Final RA Report for Paducah (DOE, 2002) shows the details of the installation and verification soil sampling.

Lasagna was also used at the abandoned Quicfrez industrial site in Fond du Lac, Wisconsin to remove high levels of TCE from the site and under a near-by river (pictures below). The soil at the site consisted of saturated clay and silt with very high levels of TCE (much of the site contained DNAPL levels of TCE). The site was expanded into the Fond du Lac River to allow treatment under half of the river. During the pre-Lasagna soil sampling event, substantially more DNAPL was found than first observed during the design phase and posed a greater challenge for Lasagna. There were areas with TCE concentrations above 1000 mg/kg. Two anodes (north, south) were used with a single center cathode. Installation of the electrodes and treatment zones lasted only 3 weeks with the electrical and recycle plumbing taking another 2 weeks to complete. No stray current was found at nearby utility lines. The system was fed by 208 volt, 3-phase line power rated for 600 amps. The initial DC output measuring 190 volts and 500 amps. Once the system reached operating temperature (70-80°C), the power was reduced to about 110 volts and 450 amps. Operational costs were minimized using remote monitoring.

The project lasted 2.5 years until economic conditions in 2008 resulted in the State of Wisconsin and the WDNR eliminating funding in 2009. Post-Lasagna sampling shows the DNAPL regions and concentrations were significantly reduced. Given more time, the area could have been treated to the clean up target. Although there were hopes of a better result, over 2/3 of the TCE mass was removed. However, the iron filing filled treatment walls remain in place and will continue to contain and treat any TCE migrating due to convection or diffusion for many years.

The latest installations were installed in October 2008 at an active facility in Ohio. Two separate installations were operated to treat TCE contamination in saturated clay soil at two distinct source areas at the site. The Lasagna systems were installed under parking lots and in front of loading docks without interfering with the facility’s production or distribution.

The soils were primarily contaminated with TCE to DNAPL levels and breakdown products cis-DCE and vinyl chloride. Area-2 was a chemical drum storage pad and also contained some TCA, 1,1-DCE and methylene chloride along with non-chlorinated VOCs like acetone, methyl-ethyl ketone and xylenes. The soil was mostly saturated with the groundwater surface at 3-5 feet below grade. The Lasagna materials installation lasted less than 10 weeks and did not interrupt plant operations. Routes to the loading docks and roll-off off pads were available at all times. Like the Quicfrez project, a full stray voltage and current survey was performed to assure no impact of the DC field on local utilities.

After 30 months of operation, both Lasagna systems met the risk-based cleanup targets. Verification soil samples were collected and compared to risk-based targets for direct contact and future indoor-air. The Ohio EPA has agreed to termination of the Lasagna systems. The above grade equipment has been removed and the lots will soon be resurfaced.

How Much Does It Cost? 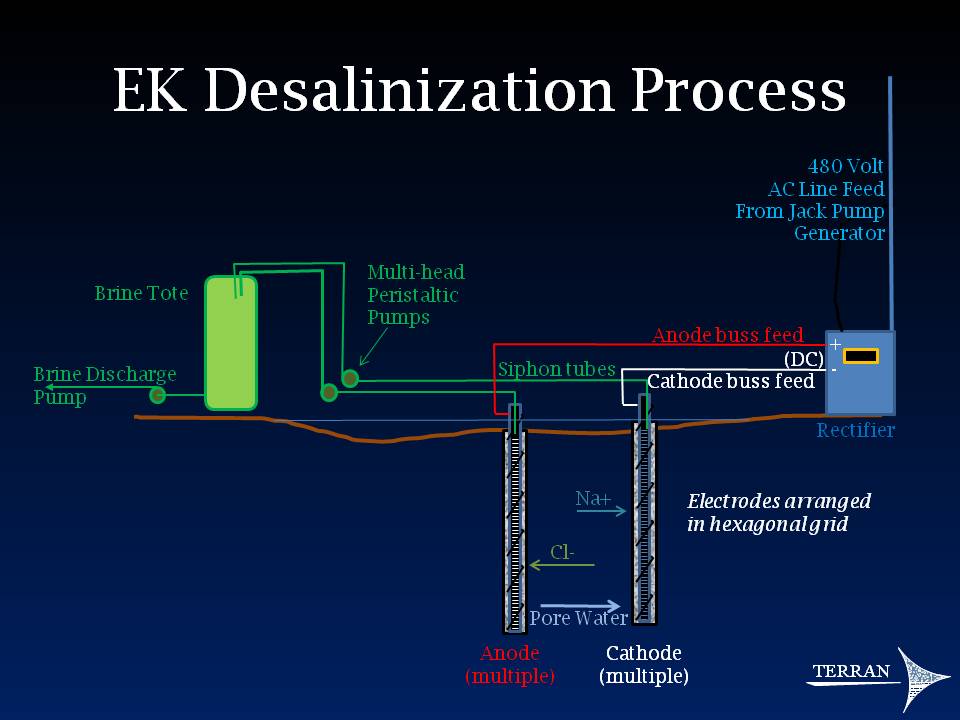 Terran has developed and patented an electromigration system to remove chloride and sodium ions from brine-contaminated soil and groundwater. Electromigration is the movement of ionic species toward respective electrodes (anions toward anode, cations toward cathode) by electrical attraction. The system may be an alternative to excavation at brine or road salt release sites. This presentation shows the latest results for our field scale demonstration conducted in a delicate environment.

The remediation process uses a Geoprobe and off-the-shelf materials to construct inexpensive electrode wells. The polar DC field transports chloride ions to anode wells and sodium ions to the cathode wells. The wells in turn are flushed with clean water while the purge water is pumped to collection tanks where the brine is stored for disposal.

The electrode wells are arranged in special arrays that optimize the brine removal and rejuvenate the soil. The electrokinetic (in this case electromigration) process works in saturated and unsaturated soils with the electrical power provided by a well head generator or AC power line connected to the electrode array through a rectifier. Since EK desalinization requires direct current, another option is using solar or wind power.

Terran's EK desalinization system has been used successfully to treat a brine spill in an environmentally sensitive area in North Dakota where excavation would have been costly and caused many other negative impacts. At another site in North Dakota, a solar powered EK desalinization system is being evaluated for the practicality of using raw solar power without a power management system or batteries to treat a groundwater issue downgradient of a brine release.

Metals in a mobile state readily move in a DC electric field. Cations, such as cadmium, chromium and lead will move toward the cathode while anions such as arsenate will move toward the anode by electric charge. The contaminants can be removed at the electrodes or captured in in-situ treatment zones.

One of the original applications for electroosmosis was to dewater saturated low permeable soils for geotechnical purposes. Strategically placed anodes and cathodes can be used to extract water far more efficiently than normal gravimetric means. Water moves by electroosmosis toward the cathode and is removed. Cost and effectiveness are directly related to the salinity of the soil. In brackish areas, the current demand might be too high at the voltage gradient required. Temperature limits also play a part in electrically conductive soils. Terran is investigating the use of electrokinetic enhanced dewatering wells to depress the water table in moisture sensitive areas.