A Primer on Shock Absorbing CONcrete

SACON is a cement-like material containing small, cellular voids that collapse under impact to stop and retain bullets. A typical round fired from a military rifle penetrates approximately 3 inches into a SACON block and does not ricochet. SACON, therefore, is an ideal material for the construction of live-fire training ranges and safety barriers. Buildings, walls and villages made from SACON blocks allow military and law enforcement tactical training in a realistic environment with live ammunition.

How is SACON made?

SACON blocks are made using special forms at a precast concrete plant. The process starts by mixing Portland cement, water and fine sand in the correct proportions. Lead immobilizing chemicals and polypropylene fibers are added to the mixture. Finally, an aqueous closed-cell foam is added to reduce the density and compressive strength. The foam reduces the density of SACON about 40% compared to normal concrete.

Who can manufacture SACON?

The patent for SACON is held by the U.S. Army Corps of Engineers. A license is required to manufacture SACON.

What are the Quality Control Specifications for SACON?

There are three primary quality control specifications for SACON: 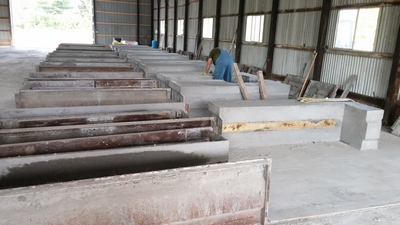 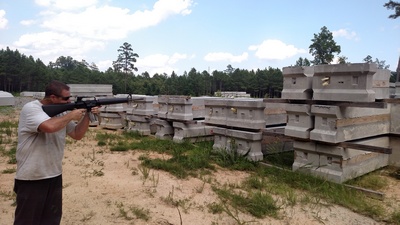 Specification 03333 lists detailed requirements for the raw materials, mixing proportions and handling of SACON. The most critical material requirement is for the aggregate. The specifications call for a fine or medium sand with all material passing a 3/8 inch screen to prevent ricochets caused by embedded rocks.

The following table shows the mixture proportions for making SACON according to the latest specification.

Other that substituting polypropylene for steel as the fiber binder, the specifications have not changes significantly since SACON was invented.

Over the last 20 years, the increased strength of Portland cement has become an issue with the proportions listed in the 03333 Specification. Most cement consumers (highways, buildings, general construction) clamor for higher strength materials. So the Portland cement suppliers have worked to that end and have succeeded in making stronger cement. This has affected the bullet-absorbing performance of SACON. It is now very difficult to add the full portion of Portland cement called for in the specification and consistently meet the required compressive strength. The mixture proportions must be modified to meet the important shoot test depth of penetration requirement.

The density of the SACON can be adjusted according to the kinetic energy of the projectiles to be captured. For instance, SACON used only for handgun training could have a density of 75-80 lb/ft3 to prevent ricochets from the lower energy rounds. However, density and penetration testing should be conducted with samples of SACON prior to specifying a density for munitions other than the military type rounds.

If you are considering a live-fire shoothouse or gun range, please Contact Terran to discuss you needs, ideas or designs. 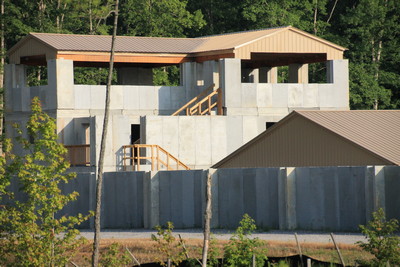